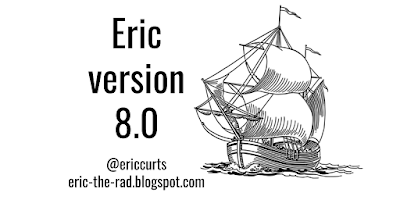 I am turning 49 years old. That is not typically thought of as a milestone the way next year will be when I hit 50. However it still has significance for me.

You see I am a bit of a nerd. As humans we usually like nice round numbers like 40 and 50, but 49 is special too. It is a multiple of seven, actually a square of seven, and seven has a scientific connection.

Every day cells in our bodies wear down, die off, and then get replaced with new cells. Some do this quickly, like skin cells every two to four weeks. Some take a longer time, like bone cells that can last up to ten years. But on the average, scientists estimate it takes about seven years for every cell in your body to be completely replaced.

So every seven years you are literally a new person.

Well I am turning 49, so I have replaced every cell in my body seven times, and this is now going to be the 8th version of me. Eric version 8.0. Of course that sent me down the existential rabbit hole, asking the question “So who am I exactly?”

It reminded me of the ancient philosophical thought experiment “The Ship of Theseus”. It goes like this… Let's say there is a famous ship commanded by the hero Theseus as he travels the world, winning great battles. Over time though, parts of the ship start to wear out and break. So the crew replaces those parts as needed with identical new pieces. New boards. New sails. New ropes. But exactly the same. Eventually every single piece has worn down and been replaced while Theseus and his crew continue to sail the ship.

Here’s the question… Is it still the same ship? Even though it looks the same and has never stopped sailing, there is not one single piece of the original boat left.

I feel a lot like that ship. I have traveled a long way, fought many battles (won many and lost many), seen amazing sights, made mistakes, had adventures, and bit by bit have changed myself seven times over.

A son of a father who struggled with alcoholism and who lost that struggle when I was eleven.

A husband to my college sweetheart, but seventeen years later I no longer was.

A husband a second time, and a step-father to three amazing boys, but after nine years I found myself alone again.

A father to my wonderful daughter, and a grandfather to her beautiful baby boy.

But like the ship of Theseus, who am I?

But on the other hand I know I am something new. In so many ways I have changed. My hair has moved from my head to my face. My knees make popping noises they should not. I take pictures of my prescription bottles with my cell phone just so I can zoom in to be able to read the tiny directions. But I have also changed internally... many of my opinions and beliefs and goals and dreams. I am not the person I used to be, and that's ok.

I am a new person. Seven more years have passed and the ship of Theseus has once again been replaced board by board.

So now I am pulling out of the dock again and heading out on my eighth voyage. It's a new life. With the wind to my back and the sun to my face I am eager to see where my next travels take me, the people I will meet, and the adventures that await.