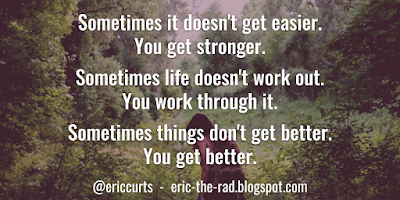 When you are going through a difficult time, or dealing with a painful loss, or facing a seemingly insurmountable challenge, people try their best to offer words of encouragement. We all do it, and we all really mean well, even when we struggle to find the right thing to say.

Often we will share something positive and hopeful such as:


Hang in there, it will get easier.

It will all work out in the end.

Things will get better.

Now if you are struggling and hurting, I certainly hope all of those things turn out to be true. But I don’t want to lie to you. Unfortunately sometimes it doesn’t get easier. Sometimes life doesn’t work out. Sometimes things just don’t get better.

Thankfully though there is still hope. There is a chance for change. Just maybe not the change we are thinking of.

As usual, since I am a bit of a nerd, my inspiration for understanding this comes from something a bit geeky… video games.

Back in 2004 the greatest video game ever created was released. World of Warcraft. (Please direct any objections to spam@ericcurts.com) I had played several MMO’s before (From Everquest to Toontown) but I had never seen anything so immersive and expansive as this virtual world.

I created a human paladin, an awesome mixture of might, magic, and holy defender of all that is right. As I ventured around the starting zone of Elwynn Forest, I easily defeated candle-headed Kobolds in the mines, fought gurgling Murlocs by the lake, and collected lots of bundles of wood. Everything was going perfectly.

Then I met Hogger.

Hogger was a level 11 gnoll, the chieftan of the Riverpaw pack. The quest to defeat Hogger is a legendary task in World of Warcraft because for many players it was the first time in the game we actually came across a significant threat. You see, Hogger was “Elite” (with that special embellishment around his portrait) meaning he was much more powerful than anything else at that level.

Eventually I was able to complete the quest, most likely with the help of several other people who joined in the battle to assist. However, like many other players, in my mind Hogger became an enemy of legend, a creature to be feared.

And then I kept playing and moved on to explore Westfall and the Redridge Mountains and Stranglethorn Vale and on and on. And then something strange happened.

From time to time I would have an occasion to pass through Elwynn Forest again, probably going to or from Stormwind, and sometimes I would think of Hogger. Eventually I decided to visit him again. As I rode my horse along the road toward his hill I could feel that old dread and fear mounting up inside me, remembering all of the times he had killed me. When I finally got to Hogger, I attacked.

He was dead in a few seconds.

So what had happened? Hogger had not changed. He was still the same level 11 elite monster he had always been. Something else had changed.

I had changed. I was stronger, with exponentially more health points. I was smarter, having mastered dozens of new powerful and devastating spells. I was better.

Sometimes our challenges in life are a lot like Hogger. I truly wish I could say things you face will get better, but unfortunately that is not always true.


Things may not change. But you can change. Just like leveling up a video game character we can become stronger, smarter, and better.

Like my paladin, sometimes we level up by going on a quest. We may need to move out of our comfort zone, and try something new that stretches us and gives us a new perspective on life.

Other times we level through grinding. In the game that would be the often tedious tasks of battling dozens of low level beasts or collecting loads of resources for a vendor in town. In life grinding can simply mean pulling ourselves out of bed and facing one more day, moving forward one step at a time, not giving up.

And little by little, day by day, we get stronger. We learn about who we are. We grow.

The world around us may not change. We may still continue to face the same problems and the same pain. But when we do, we can face them as a new person, with a different mindset, perspective, and resolve.


Sometimes it doesn't get easier. You get stronger.

Sometimes life doesn't work out. You work through it.