Hey Men… Don’t be a Chinchilla - Why guys struggle with being open about our problems, anxieties, fears, and pain 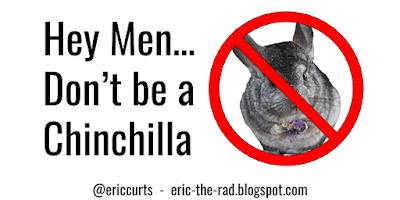 Most of my life I have been a chinchilla. Metaphorically obviously, although with my luxurious beard the confusion would be understandable.

No, what I mean is like most men I have unfortunately behaved like a chinchilla. If you are a man there is a good chance you have dealt with this same problem. And if you're not a man this may help you understand us a little bit better.

Chinchillas are fascinating critters. They hop like a kangaroo, and have ears like a bunny, the tail of a squirrel, the face of a mouse, and amazingly thick and soft fur. Instead of taking baths, to get clean they roll around in volcanic dust, to simulate what they used to do when they lived in the Andes mountains of South America.

As interesting as all of that is, there's a different characteristic about chinchillas that I identify with as a man. (Sorry, I don't roll around in volcanic ash.)

The first chinchilla I ever owned was named Velvor, because of his velvety soft fur. He was a wonderful pet! He was intelligent, always friendly, loved to cuddle, and was full of energy.

I went to his cage to check on him as normal and found him lying on his side. Don’t panic animal-lovers, he was not dead, although he was very close to dying. He had no energy, no strength, and was unresponsive to me.

I rushed him immediately to our local veterinarian, who thankfully specialized in exotic pets. After a quick X-ray, the very serious problem became clear to the doctor. Over the course of many, many months Velvor had developed a massive hairball in his stomach. The mass was so large it had taken up all the room in his stomach so that he could no longer eat and process food. He was starving to death, and was within hours of dying.

I felt like a terrible failure as a pet owner, but I had no way of knowing. RIght up until Velvor fell over on his side he had been acting perfectly normal. He was active and alert. He had a full fluffy coat of hair. It seemed like nothing was wrong.

And that was exactly the problem.

You see, chinchillas are naturally wild animals from the mountains of South America. Although we see them as adorable pets, there are many creatures in their natural habitat that see chinchillas as dinner. In the wild, chinchillas cannot afford to show any weakness. If they act hurt or weak or in any way sick, they immediately become an easy target for predators. To stay alive, chinchillas will act like nothing is wrong, and will go about their daily lives as normal, to avoid showing any possible signs of weakness. And they will keep on doing this right up until the moment they fall over dead.

Although this may make an odd sort of sense in the wild, it was extremely dangerous in the safety of my home. I was there to care for Velvor and would have done anything to help him, but his instincts took over and he hid his weakness from me.

Thankfully there is a good end to this story!

The veterinarian explained that we had a very slim chance of saving him. We needed to do two critical things. First, we had to find a way to break up the hairball in his stomach so that it would pass through him. And second, we needed to get calories and nutrition in him.

For the first problem, the solution was pineapple juice. Yep, that’s right. I had to take a syringe full of pineapple juice and squirt it into his mouth and down his throat. The acidity in the juice would slowly start to dissolve the hairball so it could break up and pass out.

For the second problem, I had to force feed him a special food paste. It was a tube with this super high calorie, nutrient rich paste. I was supposed to squeeze a little bit into his mouth and hope he would accept and swallow it. Thankfully he ended up really liking the beef flavor (who knew?) and would eat bits of what I gave him.

And over the next couple of weeks this is pretty much what I did every two hours or so. I was teaching at the time, so I had to bring his cage to school with me each day and set him by my desk. Every other class period the students would watch as I would take him out, wrap him up in a towel, and feed him pineapple juice and beef flavored paste, like a baby. Like an odd furry baby that likes pineapples and beef.

And it worked. The hairball broke up little by little. As he got nutrition he also regained his appetite and strength. He lived.

So with that story in mind, why do I say that for most of my life I have acted like a chinchilla? Well just like a chinchilla will hide any weakness or sickness or injury, and will pretend that everything is fine, I (and many other men) do the exact same thing with problems, anxieties, fears, weaknesses, and emotional and mental struggles.

As men, our society often expects us to be strong, stoic, and in control. If bad things happen we are supposed to pull ourselves up, rub some dirt on it, and walk it off. Unfortunately this is not realistic, or healthy for men, or women, or anyone. We all hurt. Sometimes it might just be a day from hell. Other times it’s a failure at work, the loss of a job, the challenges of raising children, financial struggles, relationship issues, stress, anxiety, depression, and more.

Yet, like a chinchilla I know I have often tried to pretend that nothing was wrong.

Unfortunately like a growing hairball, if we don’t let someone know, open up, get the pain and fears out, the problems will just continue to grow inside of us, from something small and simple and normal to something that strangles our energy and joy. Left unchecked it produces more anxiety, depression, bitterness, and anger, and at its worse, hopelessness and suicide.

Although females are two to four times more likely to attempt suicide, men die from suicide three to five times more often than women. In other words, when a man gets to the point that he can no longer act like nothing is wrong, when all of his internal coping mechanisms have failed, when he finds himself alone at the end of his rope, men are on average over 10 times more likely to succeed in taking their own lives. And of the men who do commit suicide, only half have had contact with a mental health professional. Like a chinchilla pretending that everything is fine right up until it collapses and dies, far too many men fail to reach out to someone for help when they are struggling.

So why do we do this?

So is this fear unrealistic? Well sadly, like a sick chinchilla in the sights of a swooping hawk, the fear is not always misplaced.

Over the years I have dealt with loss, divorce, death, anxiety, depression, insecurities, doubt, and more. Unfortunately there have been times when I have opened up to someone close to me and they pulled away and put up walls.

But there are other times and other people who have not. They listened and loved. They helped me lift a load I could not bear on my own, until a time I was able to carry it once again.

As men it is critical that we find people in our lives that we can open up to and be honest with when we are struggling. Maybe a spouse, significant other, friend, or family member. We need to be able to ask for help from people who understand this is not a sign of weakness but an act a strength.

I love this quote below from Brene Brown as she talks about the importance of being there for your spouse or loved one when they are struggling and willing to open up to you:

As flawed and broken humans, we need to find people like that in our lives who we can open up to. And at the same time we need to be that person for others in our lives. We all need each other.

So that is what I am trying to do. In my life and in these writings. I want to normalize this conversation. To say we all hurt and we all struggle sometimes. To say especially to my fellow men, don’t be a chinchilla. When life goes to hell, and it will, reach out for help. Open up. Find someone you can speak to. A friend, a family member, a loved one, a counselor.

You are not weak to admit that you struggle. Quite the opposite. It takes extreme courage to be vulnerable, to be open, to be honest.

Sometimes every one of us needs someone to care for us, to help us get through a life crushing time, to syringe feed us pineapple juice to break up the hairball in our heart, mind, or soul.

Don’t be a chinchilla.