Confessions of a Geek Dad 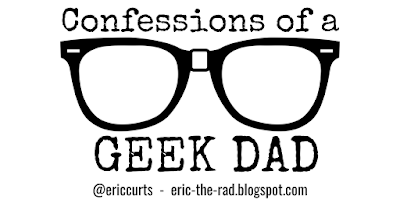 A little over ten years ago, I went from being a father of one to a father of four in one day. I had gotten married for a second time, which brought three young boys into my life, at that time ages two, four, and six. For the adventure I was about to walk into I could have said “Boy Oh Boy Oh Boy” both literally and figuratively.

On one hand, I was not so worried. After all I was already a father, and I felt quite a successful one at that. I had my teenage daughter from my earlier marriage, and in all honesty she had been a joy to raise. She was smart, talented, funny, and mature. This should be a piece of cake. One well mannered daughter couldn’t be too different from three small boys. Right?

Well on the other hand though, this was different. I realized this wasn’t my daughter. These were three boys, and I questioned if I was the right person for the task.

You see, I really did not have much of a father myself. I am sad to say that my dad was an alcoholic who spent very little time with me, made my life a nightmare when he was around, and then died when I was eleven years old. I was a boy without a father. How could I possibly be a father to these boys.

Growing up I didn’t have anyone to teach me the ways of being a man. I did not have a dad with which to shoot hoops, or shoot deer, or shoot the bull. There was no father to explain how a car works and how to keep it working (I have since discovered quite unfortunately that oil is very important.)

I did do my best to pick up what I could from father-figures in my life.  I learned hard work from the dairy farmer I worked for in the summers, commitment from my cross country coach, wit and humor from my brother-in-law, and gentle strength from our aging pastor.

Still though anyone who knows me now, knows I am a nerd. I am a geek. I am a sci-fi watching, video game playing, computer programming dweeb. I rarely watch sports. I care little for cars (as any vehicle I have owned will attest). The closest I come to hunting is searching for meat at the grocery store. So how could I give these three boys what they need?

Over the years that I ended up having the boys in my life, I am happy to say my fears were unfounded. I learned a lot about what it means to be a father to boys, including the following three reasons that prove no matter who you are, you are the person your sons need.

You don’t have to know all the guy stuff

I found out quickly that the activities I thought were requirements of being a guy, were actually just some of many options. For example, you don’t have to know all the rules to all the sports to play with your boys. I could play catch in the front yard, shoot baskets in the driveway, wrestle on the living room floor, or do the ever-popular steamroller on the backyard trampoline. Boys just want to play. And tackle. And crash. It is true when they say little boys are all afterburner and no rudder. I just tried to keep up.

You can learn along with the boys

I also discovered that no matter how little I knew about sports and tools and cars, pre-school children know even less. The great thing about having kids is the chance to be a kid again yourself, to see life anew through their eyes, and do things you never would have done otherwise. Through the lives of the boys I had the chance to make pinewood derby cars, learn how to play soccer, build a double loft in their bedroom, start campfires in the backyard, and snow board down the neighbor’s hill (although maybe not such a good idea after a certain age).

And finally, rather than being concerned about what you don’t know, share with your sons the things you are passionate about. It turns out that Carter loved going into work with me in the summer to fix our schools’ computers and I even taught him how to re-image a lab all by himself. My passion for sci-fi and fantasy translated into a love for Doctor Who with the boys running through the house pretending the Slim Jims they were holding were sonic screwdrivers. And even my strange sense of humor rubbed off on the boys as eventually I got more laughs and less odd looks when I would share my dinner table jokes (“Hey boys, how do you make a Pumpkin Roll? Push it down a hill!”)

As the years have gone on, much has continued to change. Unfortunately that marriage came to an end, but I am so happy to say the boys are still in my life. Sure, it is different, but life is always different and always will be. I still see them, still send them corny Dad jokes, and am so amazed to watch them grow up into the men they will be.

And my daughter has now made me into a grandpa! It is so wonderful to be Papa to my grandson and granddaughter. I am so looking forward to everything I will get to teach them, and everything they will teach me.

Thankfully no matter who you are, these are the things you can do for your boys.